A True Story: Richard and Elon 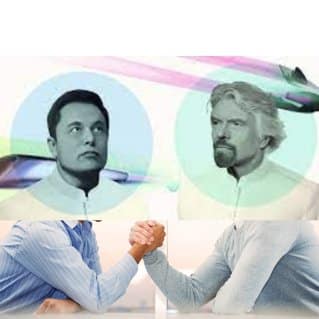 However, I actually did reach out to Sir Richard and Virgin about eight years ago re entertaining on the Mars shuttle. His executive assistant contacted me. We discussed my offer and I presented my other idea: my concept for helping women develop micro-businesses along the lines of my business for their charity that help women in remote African villages develop sustainable livelihoods. I believe it was for https://www.evebransonfoundation.org.uk. It wasn’t what they were looking for. I’m telling you this to encourage you all to reach for the stars. Now go donate somewhere.

A True Story: Richard and Elon

Elon Musk and Sir Richard Branson are duking it out on more fronts than one. Spurred to action by consumer demand, they have just entered into a bidding war to keep their patrons and clients satisfied during what could be a tedious flight to Mars. No puddle-jumper this, the famous duo have locked arms in what will become the arm wrestling championship of all time:

Who will win Handy Entertainment’s services for the trip to Mars?

AP News spoke with Jan Levie of Handy Entertainment about this turn in events. Here’s the low-down:

AP: Tell us, how did all of this start?

JL: I was busy answering my spam calls, typical Tuesday morning, looking for some ‘Good Cop’ entertainers for an event where people are known for getting wild and ignoring safety protocols. Richard called and said, “Have a minute, Jan?” “For you, always,” I said, swooning at the memories. Just then, a lead came in from Elon.

Richard was hell-bent on talking me into entertaining on the next Mars flight.

Elon said he and Grimes were sure they could make it worth my while to entertain on HIS upcoming Mars flight.

I told Elon that not only had Richard asked first, but that Richard and I go way back–how I’d pitched Richard on entertaining on the Mars spaceship ages ago, and explained to Richard that I could only do domestic flights until I was done driving carpool.

JL: Yes, I told Richard I needed the flexibility of domestic flights while I was the main source of transportation for my kids. We’re past that now, so I said—let’s do it! But I was holding out for a cute spacesuit-costume…

AP: What did Elon say?

JL: When I told Elon, he gave me the stink eye and said,

“We’ll see about that.” He can be really stubborn.

Now, go back to the pink button at the top of the page which goes to The Giving Kitchen–no joke–they are helping thousands upon thousands of hospitality workers across the Southeast.